A Generator of Socratic Dialogues

In the influential 1948 paper “A Mathematical Theory of Communication,” the mathematician Claude Shannon conducts a thought experiment to construct an algorithmic approximation of language. The algorithm can be described like this:

This process, when applied to the speech of a particular character or author, can mathematically approximate that character’s speech. While that may be a difficult task to accomplish manually, it’s a trivial computational task using semantically encoded texts. For texts that are encoded in TEI XML, such as the Platonic dialogues available through the Perseus Digital Library, a character’s speech is encoded like this:

This markup makes it trivial to exact all of a character’s speech using an XPATH expression like .//sp[speaker='Socrates']/p. Once that speech is extracted, this same probabilistic process can then be abstracted and applied to the metasyntactic or textual level, so that it can generate not only strings of words, but textual structures like dialogues. I recently wrote a program that implements this idea. Here’s a dialogue that the program generated, in which it tries to emulate the Platonic dialogue Phaedrus, and also emulate the speech of each character in the dialogue:

Socrates: Do you came down, attain immortality as we must first make the longest ears—No, Phaedrus, then pray to agree and writing speeches.

Phaedrus: Certainly. Yes, certainly. What he must speak then I think he speaks is being guided about, which you mean?

Socrates: Do you seem less sense about rhetoric.

Here’s how it works. Figure 1 shows a graphical model that represents the probabilistic process of the algorithm. The user-supplied value of M denotes the number of lines to be generated (in the above example this is 4). This determines the number of character utterances that will be generated. Each of those utterances, c, are determined by the previous utterancẹ̣—Socrates will speak after Phaedrus, and vice versa. For each character choice, the length of each utterance, l, is probabilistically determined by the text. Each of those lengths is then fed into a Markov chain generator which is given a probability table of that character’s speech. Using that table, words are generated, where the probability of each is determined by the preceding word. 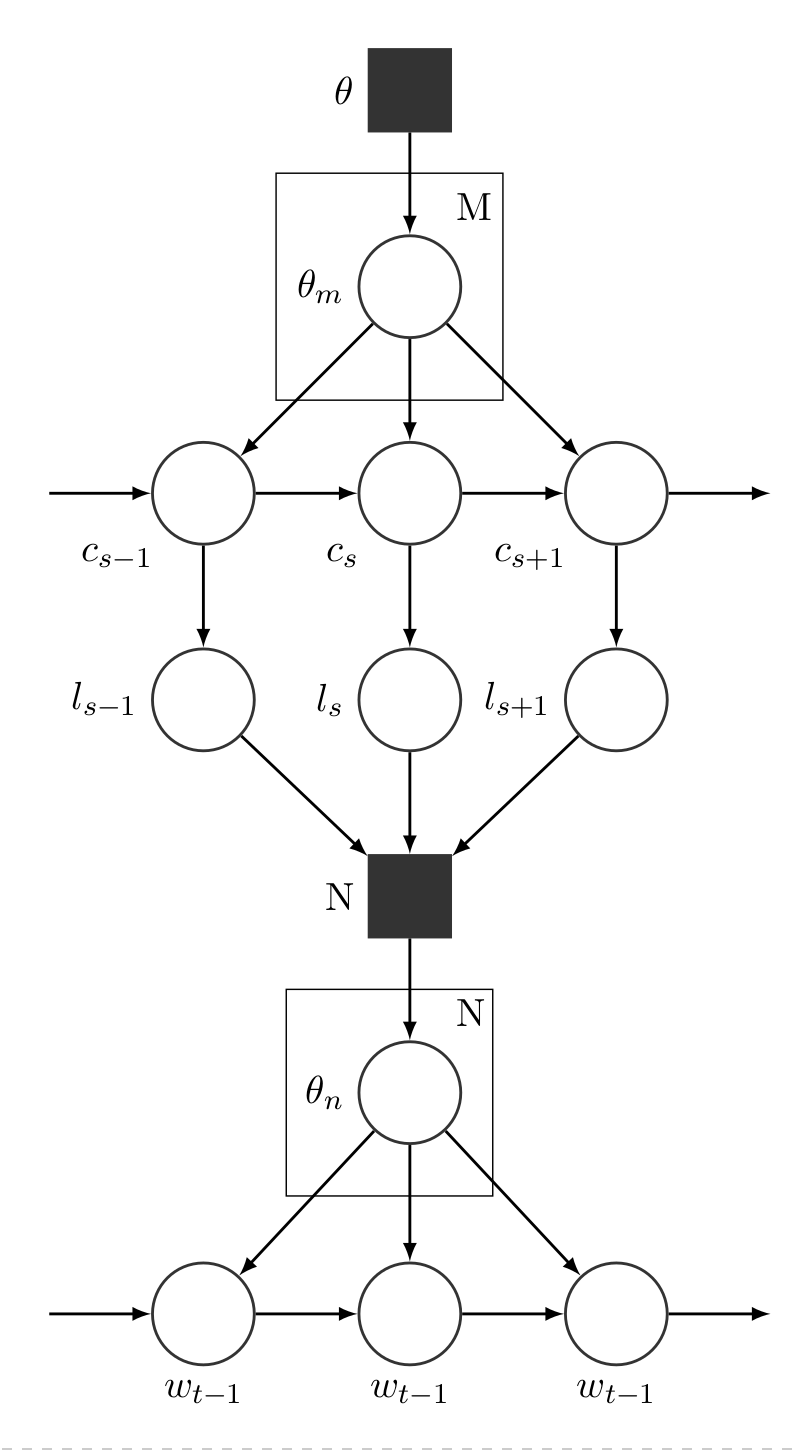 The Socratic dialogue generator should work with any Platonic dialogue in the Perseus library. Just specify the filename, the two characters you want to have talk to each other, and how many lines of dialogue you want to generate.

#How to Run The Program on DHBox If you’d rather not install iPython, LXML, and the NLTK on your computer, here’s how to run the Socratic dialogue generator in a demonstration DHBox session.